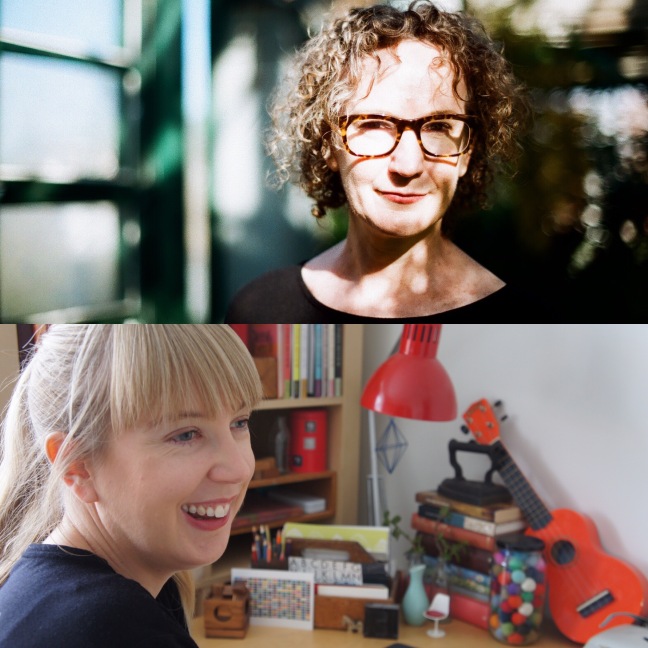 Uh oh. Katherine looked at Goodreads. Now she feels awful. (Although let’s remember this episode was recorded BEFORE KATHERINE’S BOOK EVEN CAME OUT.) So we talk about feelings. Katherine asks Kate what feelings are normal before your book comes out and Kate replies, ‘everything’. There is some groaning and sighing and also talk of Tibetan sand paintings (but you’ll have to listen to get the context of that particular metaphor…)

Then Kate has the privilege of interviewing BOTH Annabel Smith and Jane Rawson.

Annabel Smith’s first two novels were published with small independent publishers, and her second went on to be released in the US. Her first, A New Map of the Universe was shortlisted for the WA Premier’s Book Awards and her next, Whiskey Charlie Foxtrot is also published in the US (as Whiskey & Charlie). Annabel self-published the digital interactive novel/app The Ark in 2014. Annabel holds a PhD in Writing from Edith Cowan University, is an Australia Council Creative Fellow and a member of the editorial board of Margaret River Press. She is currently working on her fourth novel.

Jane Rawson’s latest novel, From the Wreck, won the 2018 Aurealis Award for best Science Fiction novel and was longlisted for the 2018 Miles Franklin Award. Her other novels include A Wrong Turn at the Office of Unmade Lists and the novella, Formaldehyde, which won the Seizure Viva La Novella Prize. She is the co-author of The Handbook: Surviving and Living with Climate Change. Her short fiction has been published widely. Jane’s day job involves writing about energy.

Annabel and Jane collaborate on the fabulous blog series What to Expect When You’re Expecting a Book.

There’s a timely shout out to NaNoWriMo (Join! Write a novel in a month!). And both Jane and Annabel talk about how the community (writers festival, friends, going to book launches etc) assisted their path to publication.

Annabel completed her first novel as part of a PhD at UWA, and says her supervisor was ‘everything’, editing and asking questions as she went along, so that by the time Annabel finished, she knew she had a publishable manuscript.

Then there’s the story of how they met. It involves Goodreads and Twitter. It is hilarious.

Thoughts on Twitter, and social media in general? Annabel and Jane urge you to make contact with your favourite writer (even if it scares you), and to engage in conversations. Jane says: Treat it like you’re at a party…you’ve got to be a little bit brave, but don’t be super pushy and boring.

Annabel thinks: It’s important to be on the internet, at least a little bit…..you need to be at least somewhere, but you certainly don’t need to be everywhere. She shares an acronym from Perth writer H.Y Hannah writers can ask themselves when engaging with social media: WIBBOW – Would I be better off writing?

There’s more about social media on the blog series, and we ask about why they reckon it has hit such a nerve. Is it to do with this general wave of people (especially women) taking control of their creative lives and money like in podcasts Starving Artist and The Pineapple Project?

Annabel says the overwhelming response to their series is: Thank GOD someone is finally being honest about these things. What a relief that other writers feel just as unsuccessful as I perceive myself to be. … I’m not just a giant loser. I’m actually, in fact, quite normal. She adds that she thinks: People WANT to tell the truth, but they didn’t know that it was ok.

We talk about festivals. Jane’s fave is Adelaide Writers Week where there are lots of writers to meet, events to go to, a laid back schedule and where she also saw Alan Hollinghurst ‘walking down Rundle Mall late one night looking lost and lonely.’

She also loves regional festivals like Bendigo Writers Festival, Write Around the Murray and the opportunities to meet new writer friends (shout out to you, Jessie Cole ;)).

We talk about Jane’s experience seeing a sports psychologist in preparation for getting on the book circuit, and what she learned.

Kate asks Annabel the question everyone wants an answer to: How do you not make a dick of yourself at a festival? Annabel says you just need to sit down and speak to someone. She paraphrases Brene Brown: if your goal is to be yourself, it’s impossible to fail.

Hot tips from Annabel and Jane on what NOT to do at a writers festival:

Jane recommends putting together a one page ‘Writer CV’ to try and hustle your own festival invites. She includes her publications, experience, topics she can talk about, chairing experience etc, and sends it out. Annabel has more success via networks, and not necessarily with ‘cold-pitching’.

We chat briefly about how Jane and Annabel landed their international rights sales. Annabel’s book was sold by Fremantle Press at Frankfurt Book Fair (the second year it had been pitched) to a small US publisher Sourcebooks. Annabel travelled to the US for publicity and loved it. Whiskey & Charlie has sold over 75k copies in the US.

Jane’s From the Wreck will be published by Picador in the UK in 2019, after a long period of no one being very interested. Until….UK book blogger Simon Savidge raved about it(after Australian writer, Sarah Schmidt, recommended it) and then, when publishers started getting in contact with her, a writer friend, James Bradley, did an intro to a publisher at Picador.

So you’ve got to work for it?

Annabel adds that small, independent publishers are trying their best with small marketing departments. So you have to work your connections ‘like you do in any industry.’ She says it feels so awkward asking, but no one minds.

Jane mentions being inspired by the way Charlotte Wood interacted with other writers  on social media (she’s no longer on Twitter) and ‘the effort she made to keep pulling other people up after her’. She thought it was admirable and decided if she ever had a bit of influence she wanted to do that too.

In Annabel’s blog series How to Become a Writer… she interviews writers about new books they have out. She found it awkward when she was approaching bloggers to do this for her first book and thought ‘Oh it would be nice if someone had asked me!’. She feels like she’s helping the writers, but that it’s also really valuable for readers and other writers to see the huge range of ways writers approach their work.

Sparked by Justine Hyde’s profile of Jane in The Saturday Paper, we talk second books, and how both Jane and Annabel approached them.

There’s SO much great advice in this interview, but when asked for their top tips, Jane says: Ask questions and ask for things, and it’s perfectly normal to feel weird.

Annabel says: Set expectations extremely low, and just try and enjoy the process…There’s only one time that it happens for the first time, and it is pretty cool.

Jane’s debut recommendations are Rubik by Elizabeth Tan and The Book of Dirt by Bram Presser. Annabel recommends Yvette Walker’s Letters to the End of Love.

Go to their websites to find out more about Annabel and Jane, and you are missing out if you’re not following these two on Twitter (Jane is @frippet and Annabel is @AnnabelSmithAUS).

One thought on “Feelings & Annabel Smith & Jane Rawson on firsts, festivals and asking for help.”